How to Freeze Food in Glass Jars 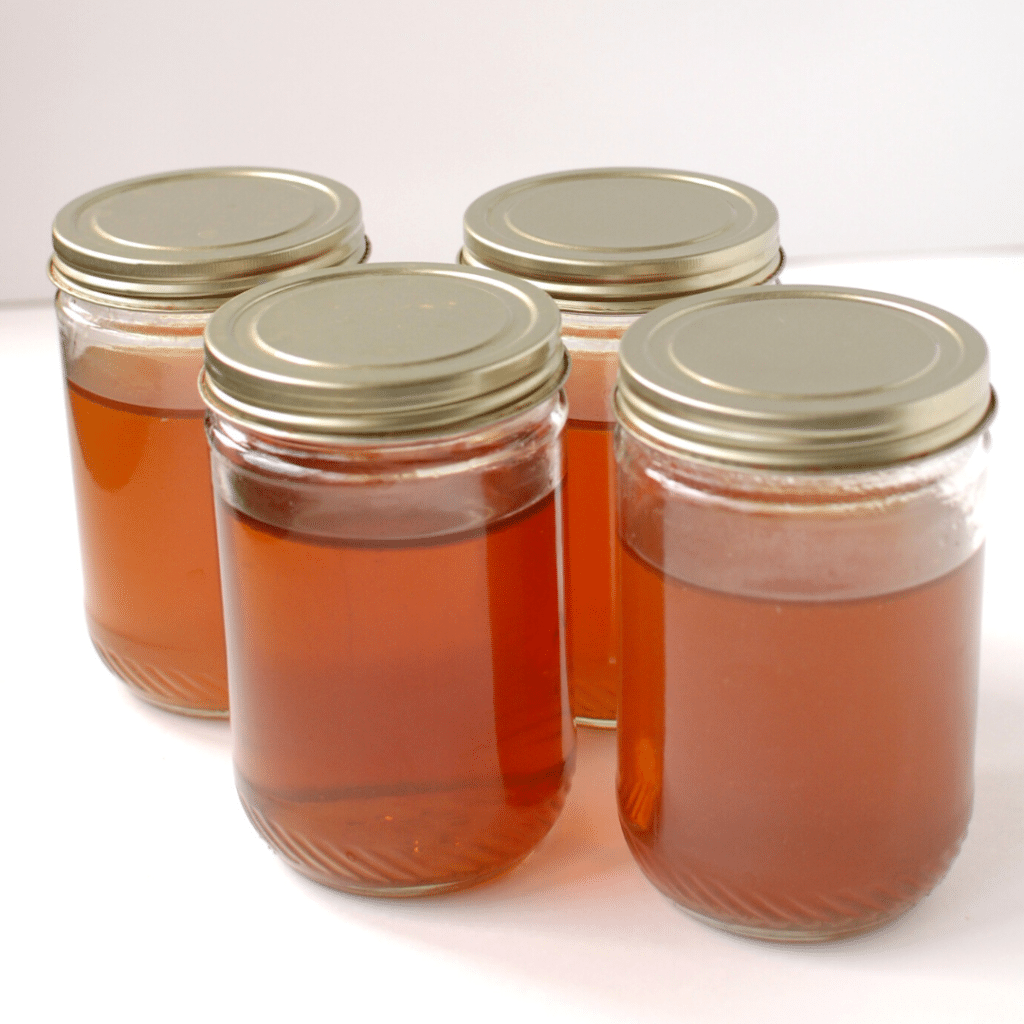 Learning to freeze food in glass jars is not just a quaint homesteading trick. It’s actually another way to reduce exposure to harmful chemicals in plastic food storage containers and disposable plastic bags. 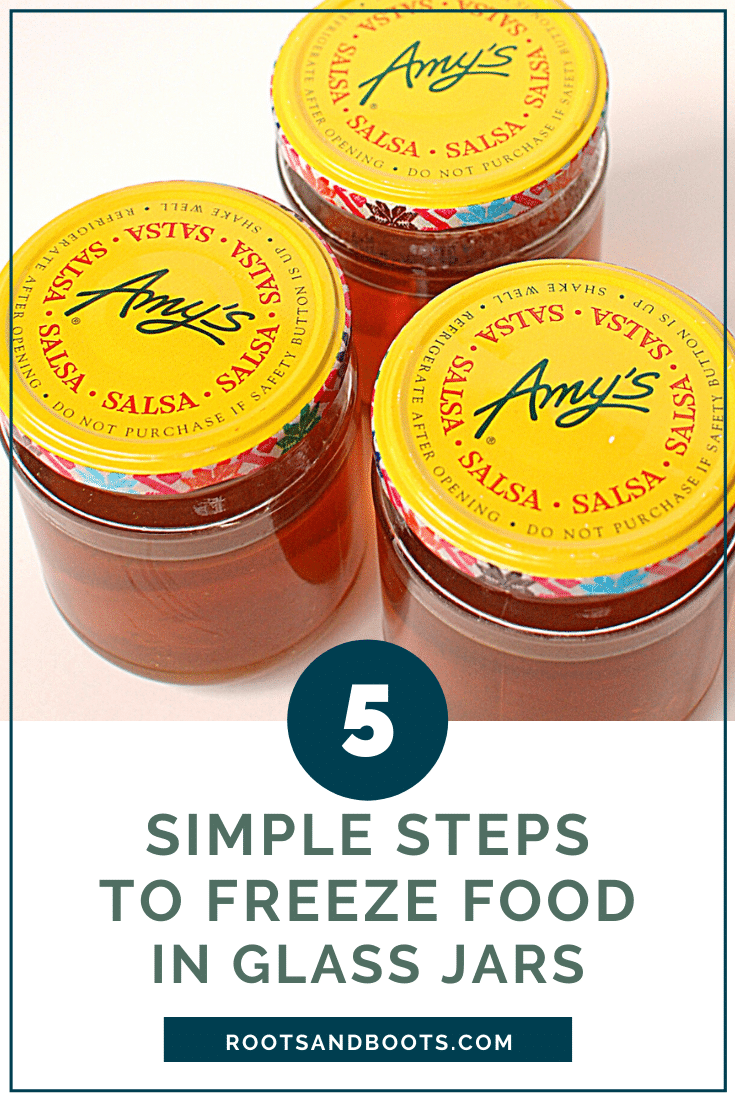 It’s also free, if you recycle glass jars you’ve already got on hand.  I have never purchased jars to use in the freezer; we simply repurpose jars from purchased foods like salsa and nut butters.  Mason jars work well, too. 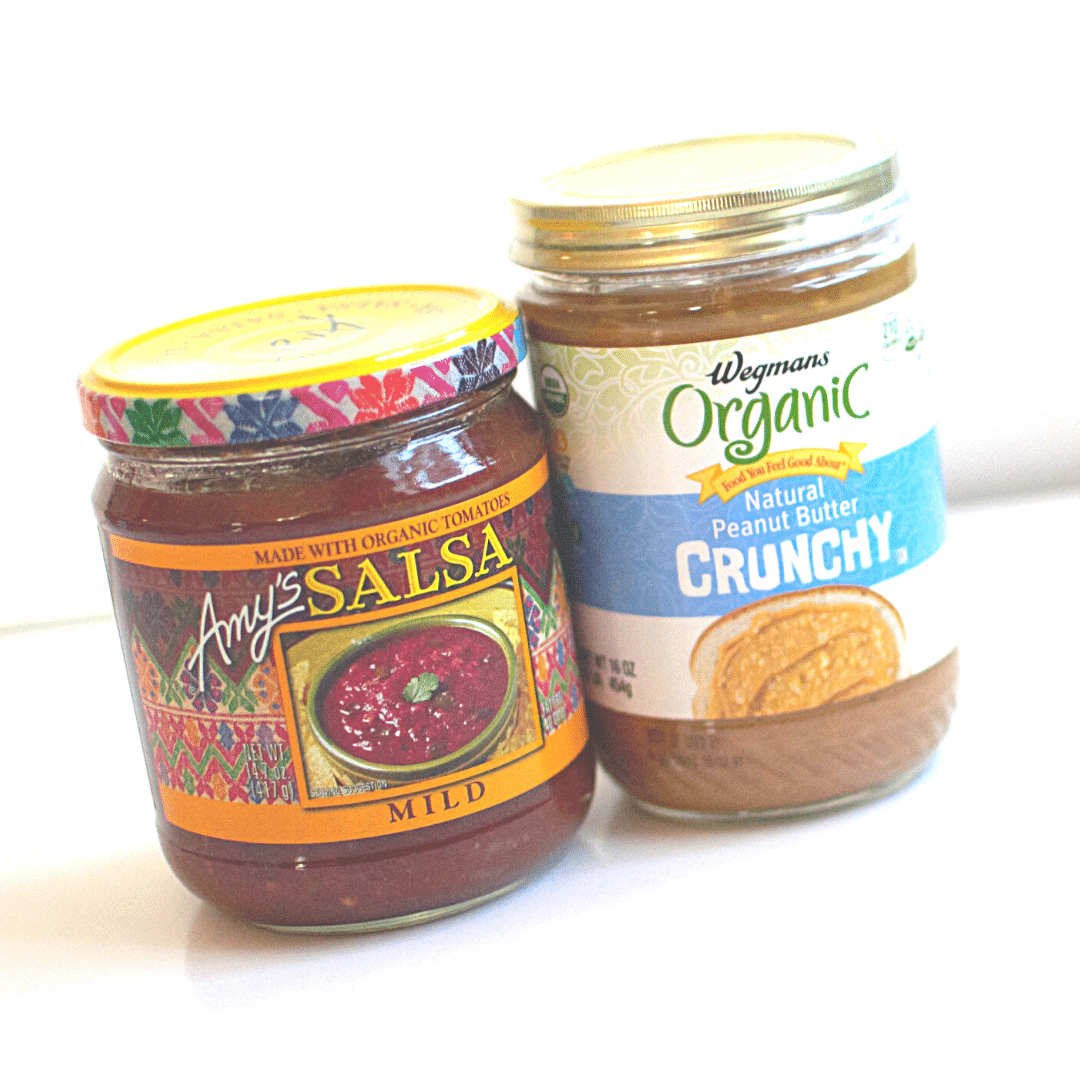 Like any healthy lifestyle change, learning to freeze food in glass jars does require a bit of upfront effort.  But once you’ve got the system down, it’s not much different from freezing food in plastic containers.

How to Freeze Food in Glass Jars

I freeze broth, beans, tomatoes, soups, and more in glass jars.  After years of perfecting my technique, I rarely break a jar.  Each of the five steps listed below is critical to prevent your jars from breaking.

And lemme tell you, when a jar of your liquid gold homemade bone broth breaks while freezing or thawing, it’ll break a little piece of your heart, too. 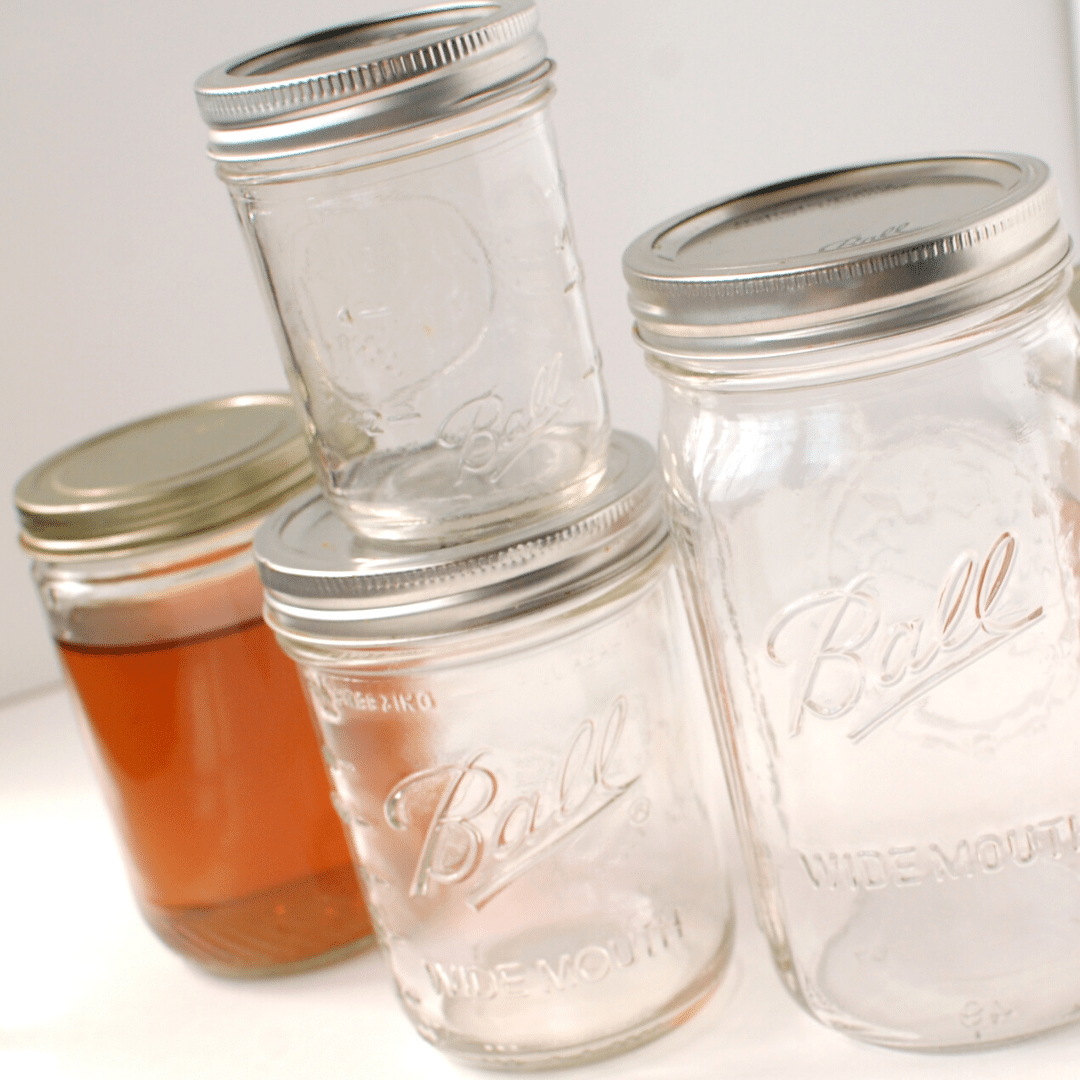 The ideal jar for freezing foods, especially liquids, is thick and sturdy with straight sides and a wide mouth.  I also recommend sticking with smaller jars, with about a 2-cup capacity or less.

As I mentioned above, I mostly use 15-oz salsa jars, 16-oz peanut butter jars, and pint or half-pint mason jars. 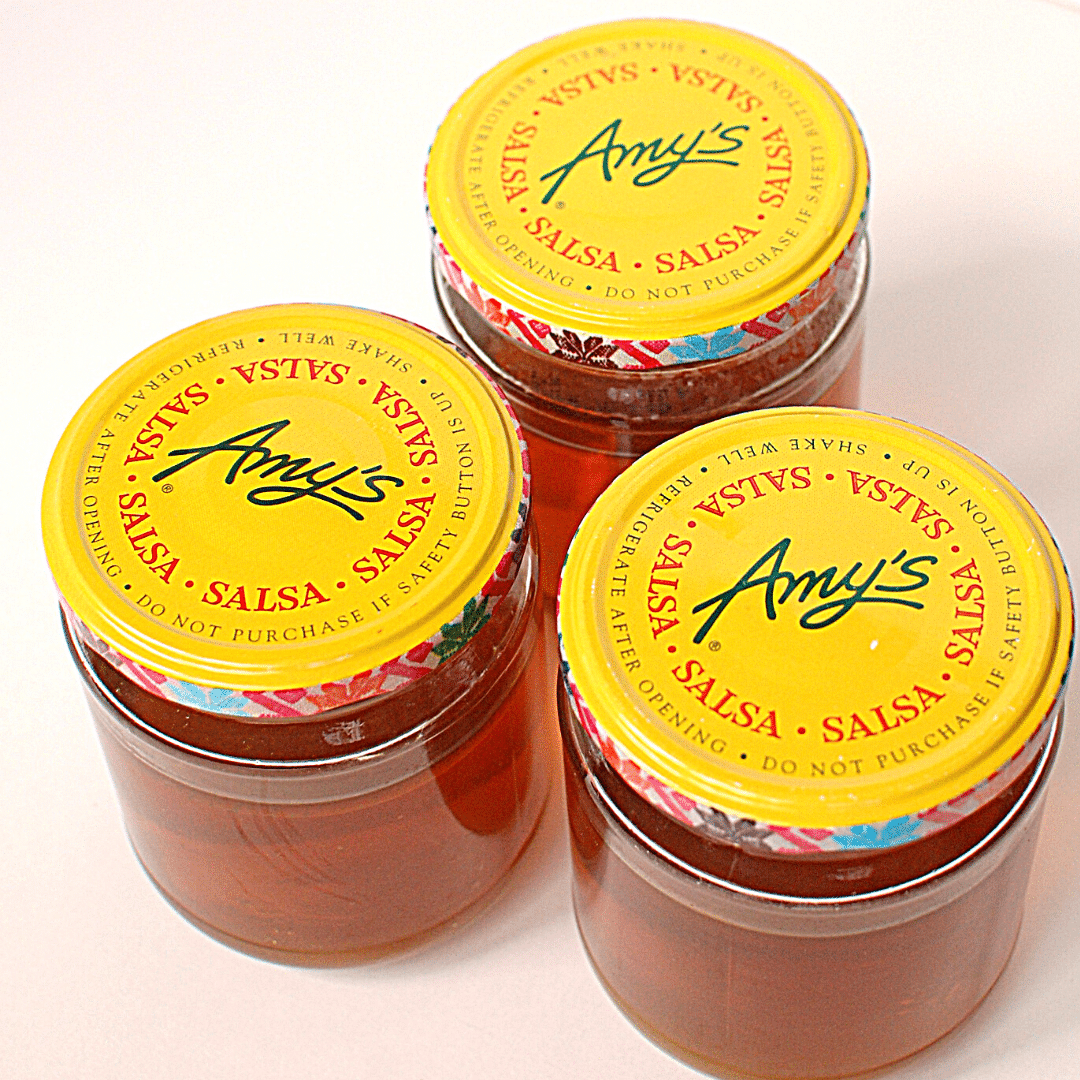 Note: don’t forget to label the jars!  This is easiest to do before the jars are filled.  I use a Sharpie to write right on the glass.

For homemade broth, I’ve got my own system: C for chicken broth, B for beef broth, and a number to indicate the batch.  C1 is first-batch chicken broth.  B3 is third-batch beef broth.  And so on.  Click here to find out more about making multiple batches of broth from the same bones. 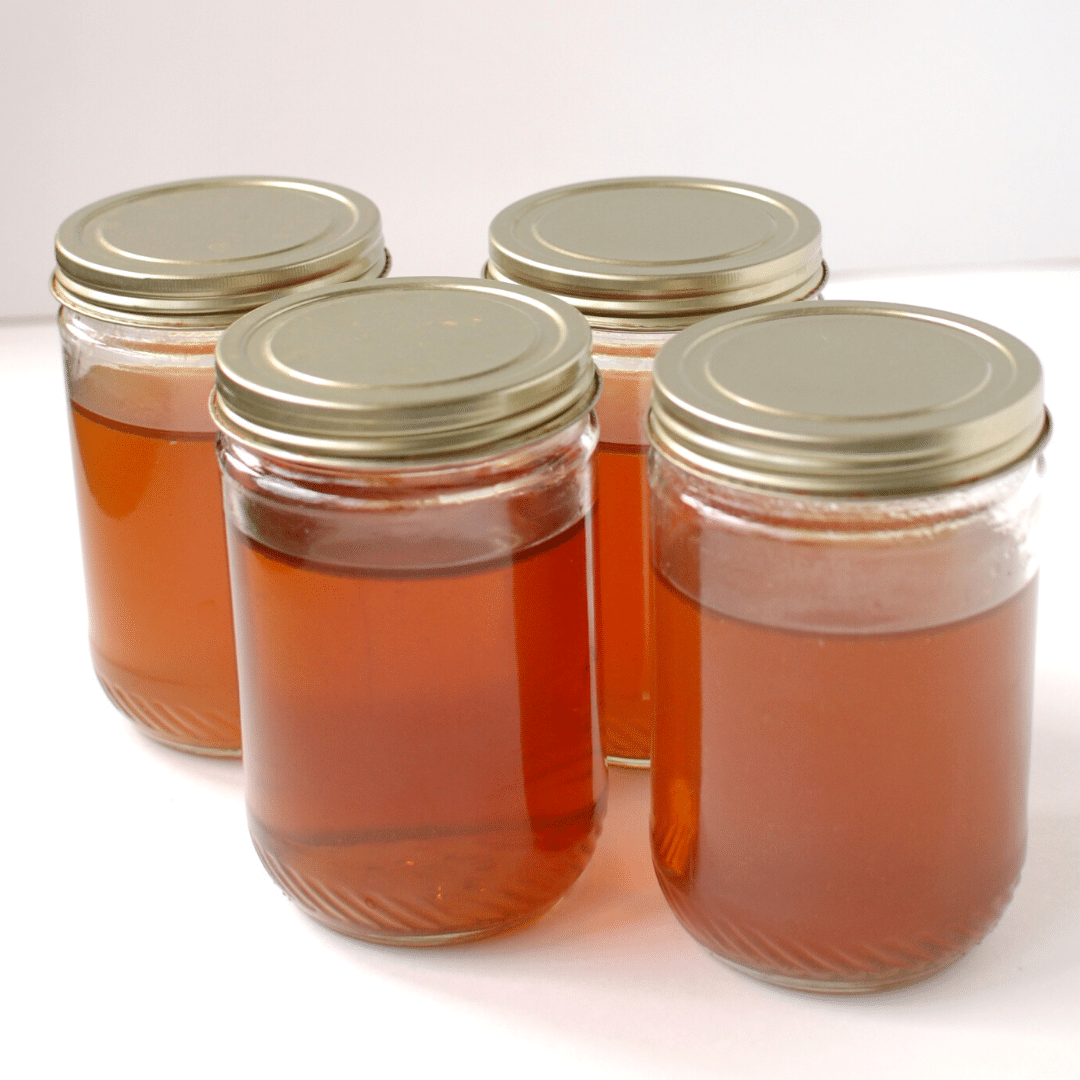 Leave at least one inch headroom at the top of each jar.  If the jar neck narrows at all, you’ll want to leave the neck plus one inch of headroom. 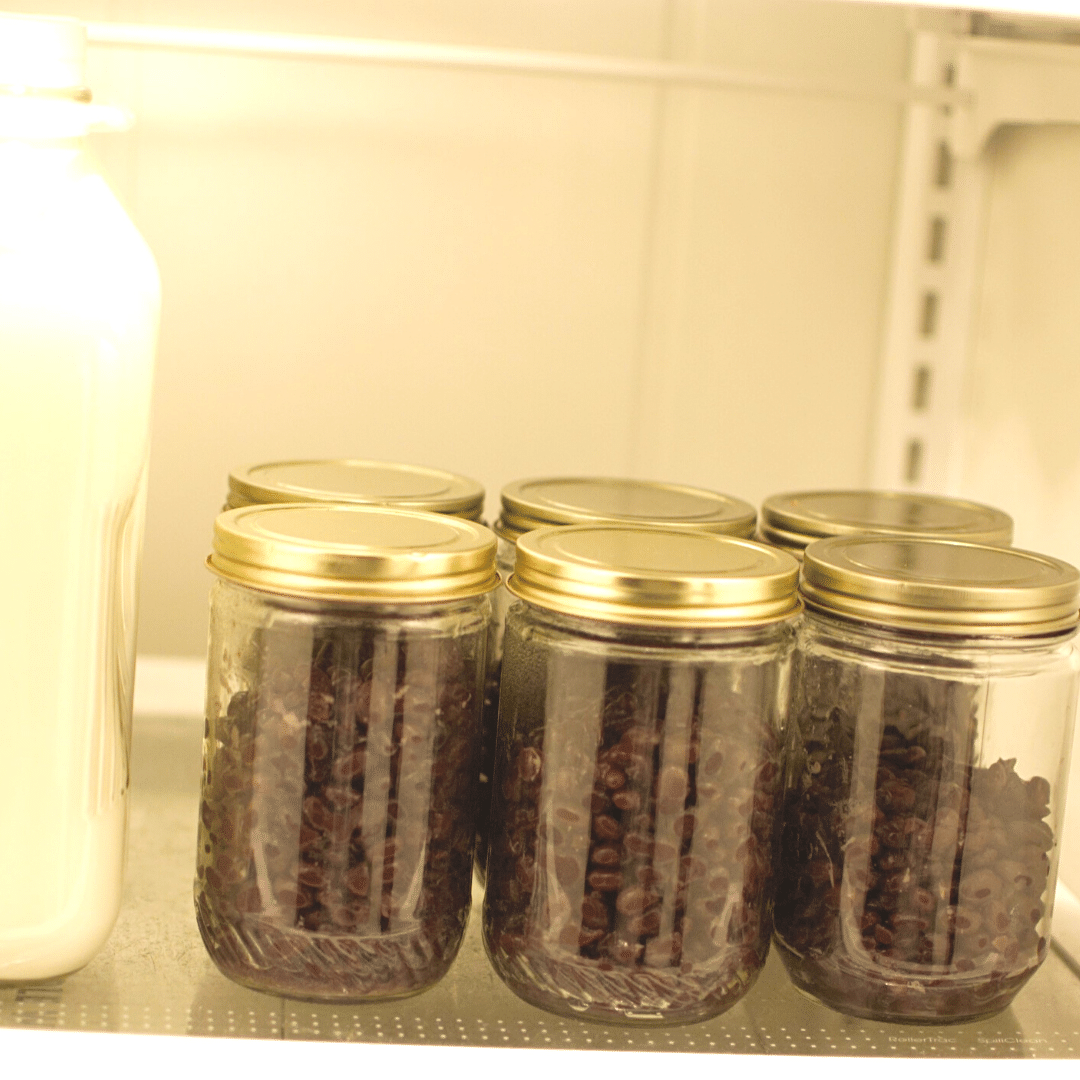 Leave the jars on the counter at room temperature to cool a bit.  Next, place the jars in the fridge to cool completely.  I often leave them in the fridge overnight or even for a day or two.  Finally, transfer jars to the freezer.

My experience as well as Katie’s experiments seem to indicate the door of the freezer is the best place to store glass jars.  I’ve also had excellent success in the main freezer compartment of our side-by-side unit. 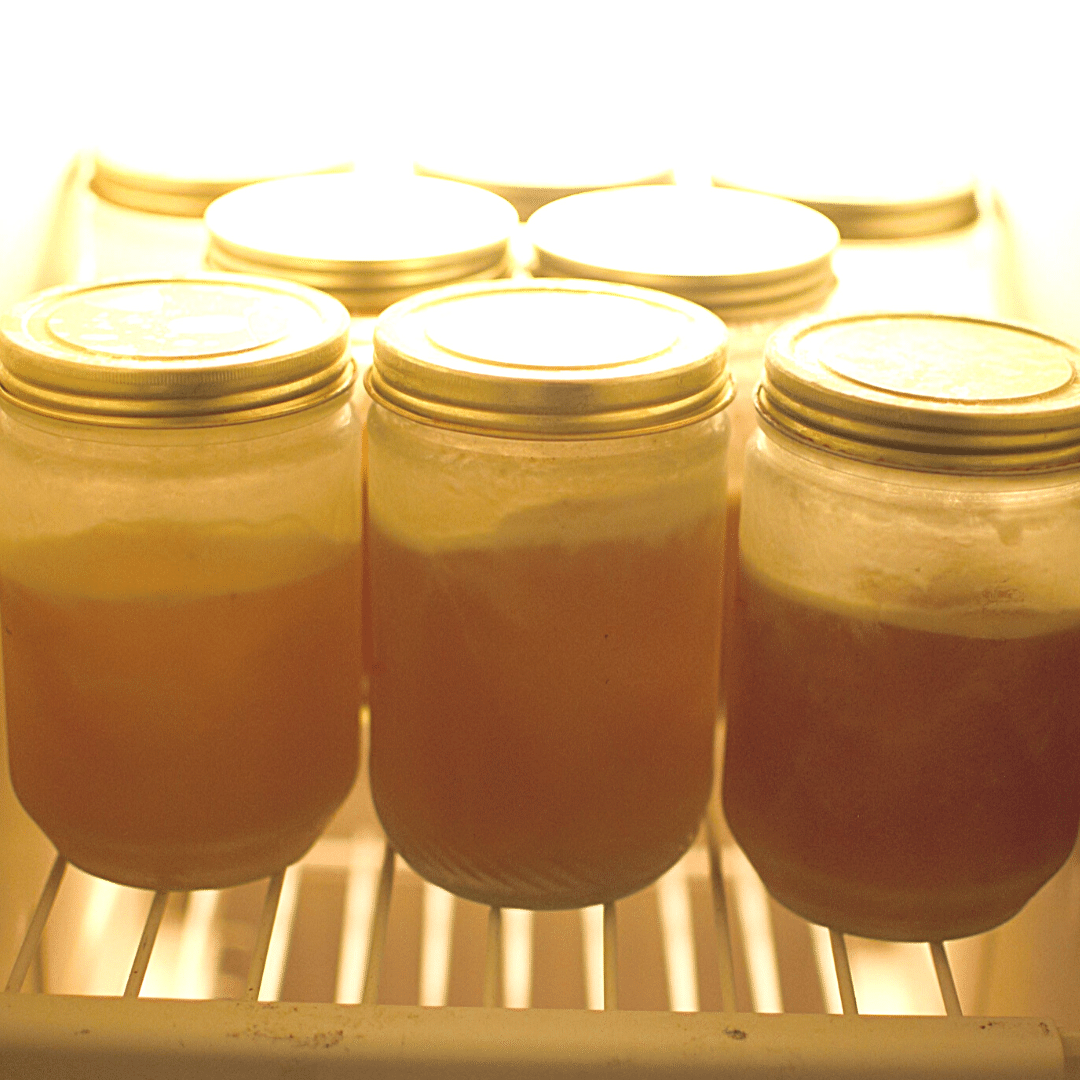 We also have a full-sized upright freezer, which is where the majority of my broken jars of broth seemed to occur  (in the interior).  I now keep all frozen foods (especially broth) in the extra side-by-side unit in our basement or in the door of the upright freezer. 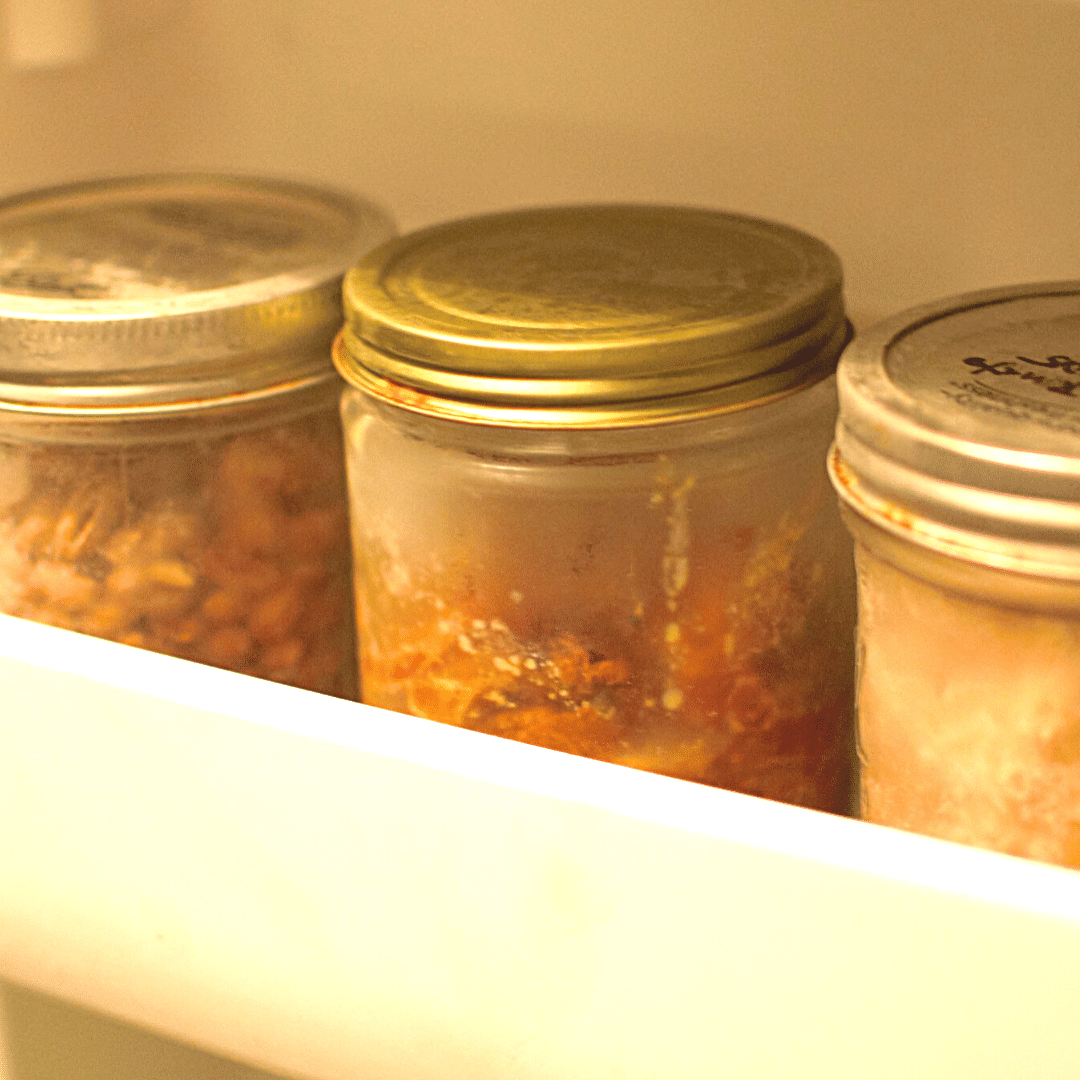 This probably breaks a few food safety rules, but I always thaw broth overnight on the kitchen counter (with a dish towel under the jars to absorb condensation).  In the morning, I stick the thawed jars in the fridge until I’m ready to use them.

But what about those times when you need broth now but it’s frozen solid down in the freezer because you forgot to thaw it last night?

First of all, the only thing I heat in the microwave is this awesome neck wrap. Avoiding the microwave is a topic for another blog post, but for now, let’s consider alternative ways to thaw broth quickly. 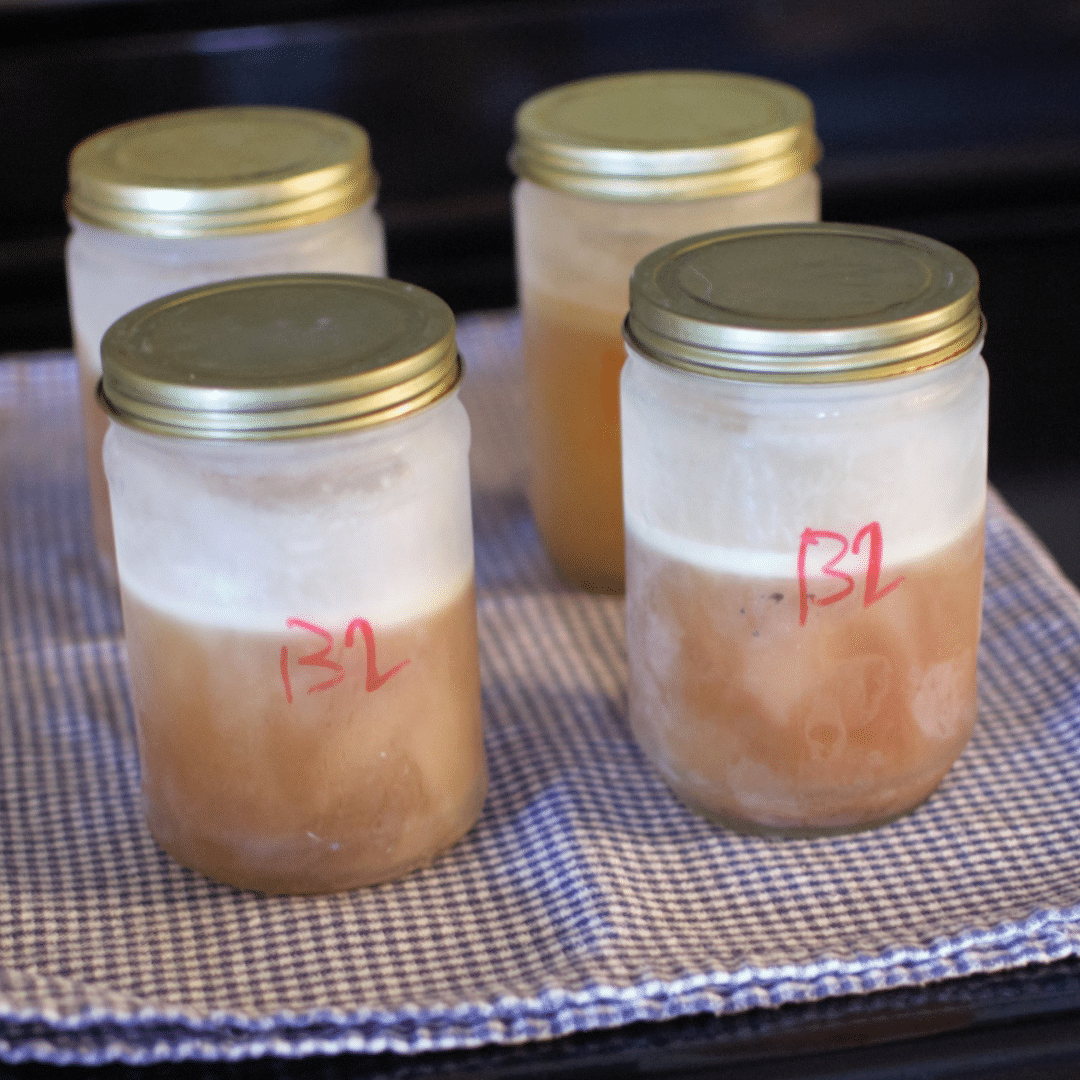 The first two ways listed below are safer but require more time.  The third way is faster but more risky.

Emergency thawing method #1: On top of a warm oven

If I need to thaw broth in a hurry, chances are good that my oven is already on.  Seems like I’m always crisping nuts or granola, baking crackers or treats, or roasting veggies.

When the oven is on, I just place the jars on a dish towel laid on top of my ceramic stovetop.  As soon as I notice liquid in the jars, I pour it off and return the jars to the stovetop.

I repeat this process until the still-frozen cylinder of broth has shrunk to a size that will fit through the mouth of the jar.  Then I just dump the frozen cylinder right into the pot and wait for it to melt. 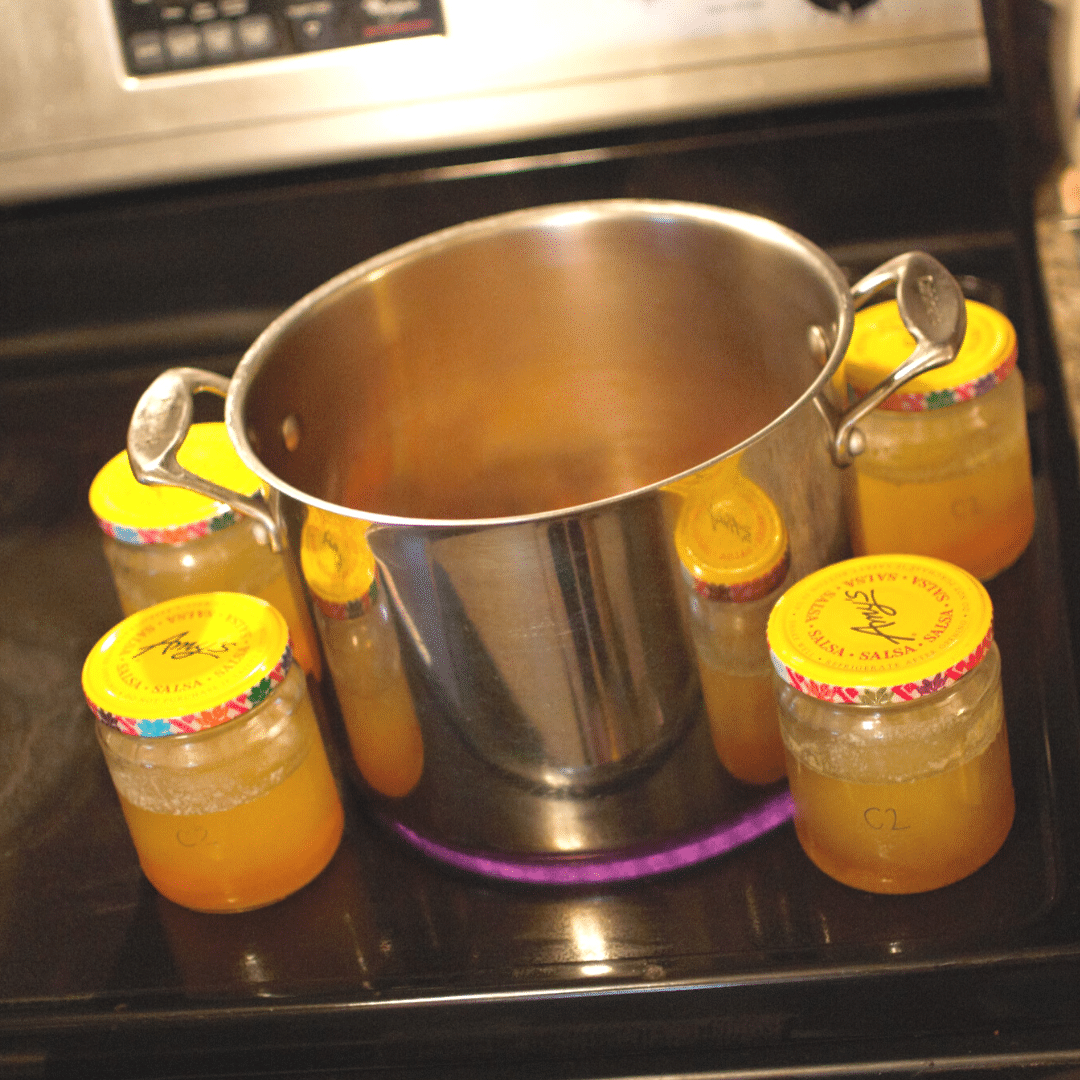 Emergency thawing method #2: Next to a hot pot

Another trick is to arrange the jars of frozen broth around my large, hot cooking pot.  This works best with a recipe that requires the veggies to cook first, or saute, etc.  And if the oven is on, too, all the better!

Then I follow the same procedure mentioned above: keep pouring out thawed liquid until the frozen part is small enough to slide out of the jar. 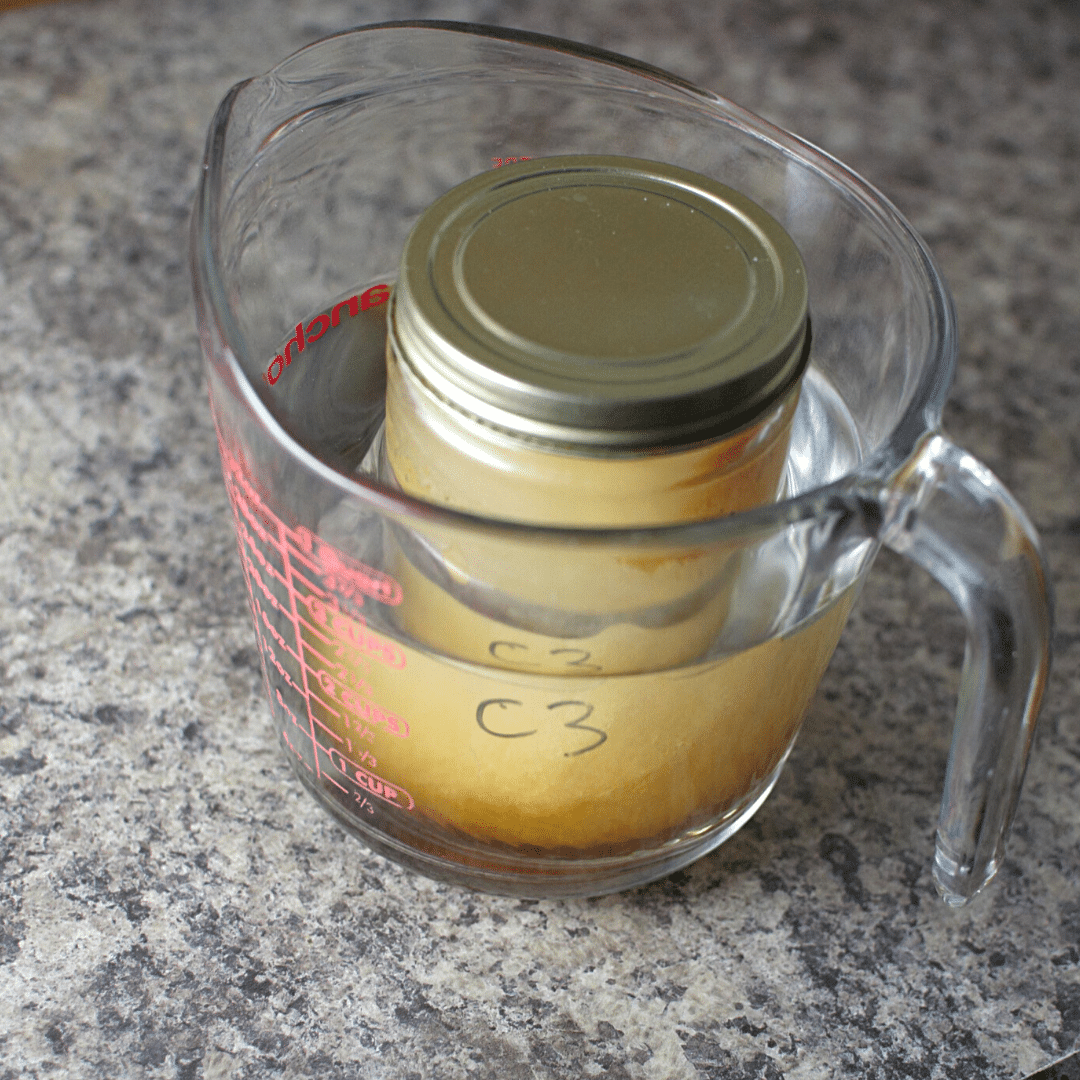 Again, this method is a bit risky, but it’s what I do in frozen broth emergencies.

Pour a small amount of boiling water into a thick, sturdy glass measuring cup. Holding the frozen jar carefully, dunk and remove several times.  Then hold the jar down in the hot water for a minute or so.

Just like the previous two methods, continue pouring out the thawed liquid until the frozen broth fits through the jar opening.

There you have it, folks: my best tips to freeze food in glass jars.

Have you tried to freeze food in glass jars?  How did it go? 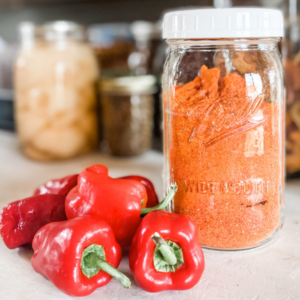 How to Make Paprika Powder 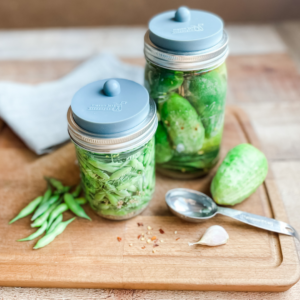 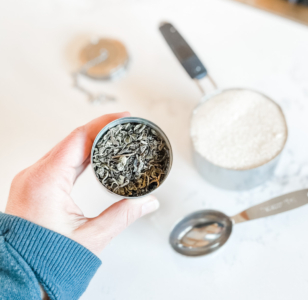 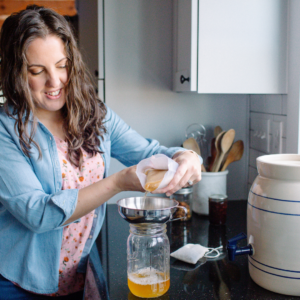 How to Start Continuous Brew Kombucha