Shakespeare for Children: One Family’s Tale and 3 Recommended Resources 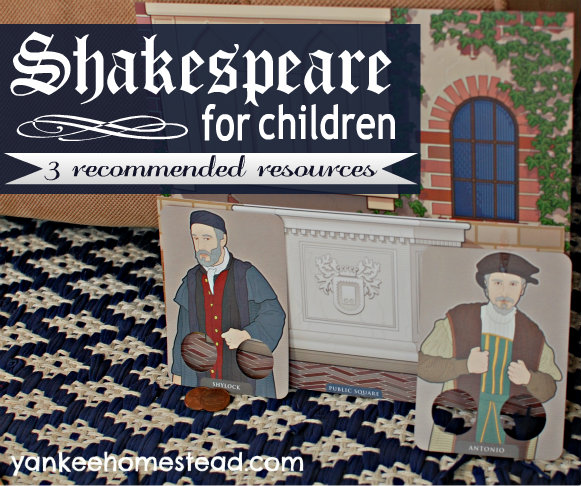 Much Ado About Shakespeare

I have always loved Shakespeare.  Who doesn’t?  His words are witty, his characters familiarly flawed, his story lines delightfully convoluted.

And so, when our homeschooling book list included selections of the famous poet’s tales for children, I was delighted.  That is, until my poor firstborn son showed signs of difficulty in keeping up with the characters.  And the places.  And all the twists and turns in the story lines.

I was frustrated that our first attempt was going so badly, and I was scared my son would grow to hate Shakespeare’s works instead of delighting in them as I had.

Finally, in desperation, we abandoned our Shakespeare studies altogether.  I just couldn’t bear the thought of laying a negative foundation for some of the world’s greatest literature.  I didn’t know how to make our Shakespeare reading time more enjoyable.

Fast forward through several conversations with other Shakespeare-loving mamas….and through my own ponderings…..and through the discovery of a few new resources.

And now, here is a glimpse of our second, successful, attempt at welcoming William Shakespeare to our home. 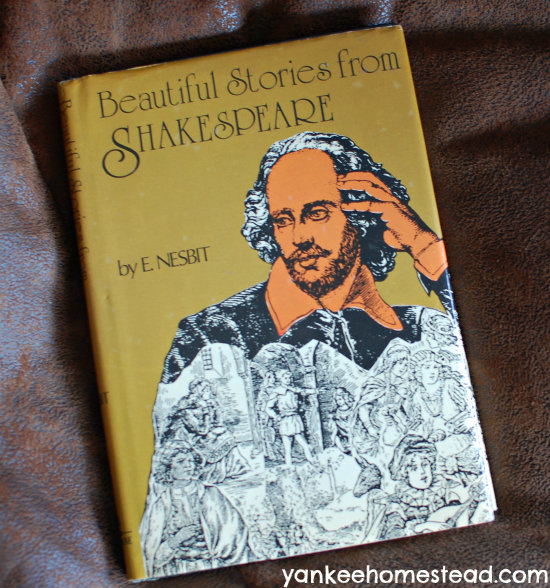 The week leading up to Easter found us busily preparing to host my family over the weekend. Consequently, I declared Thursday and Friday “homeschool spring break”.

Thursday morning, Older Brother had already gathered that day’s lesson books before I had a chance to announce our spontaneous spring break.  Normally, when I deliver the news that for whatever reason we will have no lessons on a given day, the boys respond with cheers. This time, I was surprised by Older Brother’s groans.

“Can we please do lessons today?  We’re starting a new Shakespeare story!”

What made the difference, you may ask.  Let me share two simple resources that have breathed fresh air into our Shakespeare studies, and have transformed his works from instruments of frustration into treasured friends in our home. 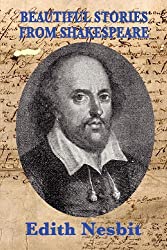 Looking back, I think one of our biggest obstacles was the particular version I’d chosen of Shakespeare’s stories for children.  The very first time we read out of Beautiful Stories From Shakespeare, I could tell it was a much better fit.  Nesbit simplifies the stories, retaining the main characters and events and leaving out all the rest.  It’s definitely quite abridged, but makes a wonderful introduction for young children.  My boys love it! 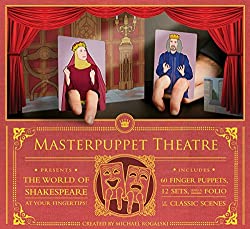 2. Masterpuppet Theater: The World of Shakespeare

Oh my goodness, this little set of finger puppets and scenery cards has made quite an impression on my boys.  They absolutely love it.

The visual manipulatives really seem to help cement the story line for my boys.  They get so involved with the characters and the action, and have a great time piecing together the plot.

Switching over to Beautiful Stories From Shakespeare made a huge difference, but it was when we added Masterpuppet Theater: The World of Shakespeare that the stories really came alive.

The cast and scenery cards for The Merchant of Venice.

Shakespeare for Children: Our Procedure

We read one play maybe every month or two.  Here’s the way it goes…

1. Mom scans the play and lightly underlines each character’s name.

2. (If Mom were really on top of things, she would next make a list of the characters, and double check the story for characters without names: pirates, fishermen, knights, etc.)

3. (If Mom were really on top of things, she would also make note of the scenery: town, sea, inside, outside, etc. and other helpful props: boats, coins, swords, a ring, etc.) 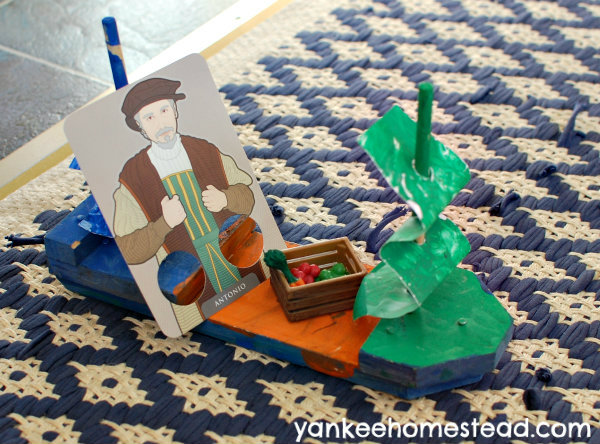 Antonio, the merchant of Venice, sailing on his ship with plenty of supplies.  (Ship courtesy of Home Depot’s monthly Kids Workshops.  Crate and food from our Schleich Feed Set

4. Mom and children search through the finger puppets to identify named characters, and to make substitutions where necessary.

5. Substitutions are created by writing the new character’s name on a sticky flag and covering the puppet’s original name. 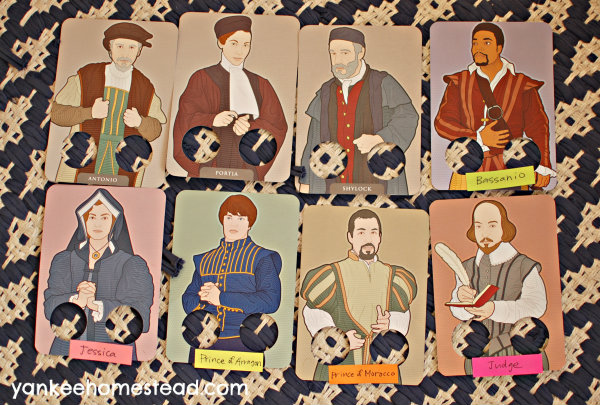 The cast of The Merchant of Venice, with substitutions.

6. (When Mom is on top of things, scenery cards are chosen and additional props are gathered.)

7. Mom reads the story aloud, while the boys act it out with puppets, scenery and other props.

8. Depending on the story’s length, Mom pauses occasionally to request a brief oral summary. 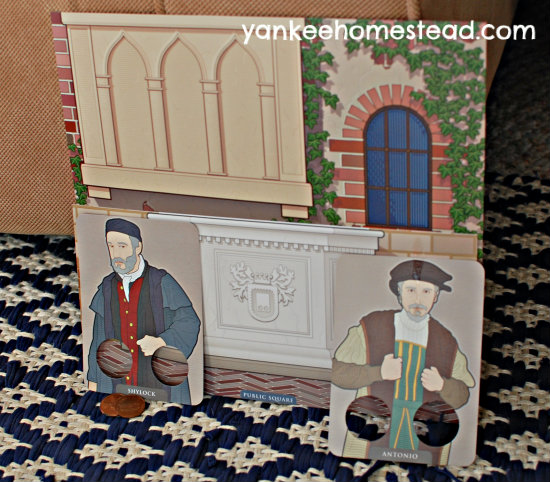 The Merchant of Venice: Shylock and Antonio. Notice Shylock’s coins…

I cannot tell you how much both of my boys–currently ages 8 and almost 5–love our Shakespeare times together.  They beg for it!

What a relief to this Shakespeare-loving mama that her boys will grow up with a fond appreciation of the poet’s works after all.

I’m so thankful to have discovered these two simple resources that allow even young children to enjoy the world of Shakespeare.  Beautiful Stories From Shakespeare

and Masterpuppet Theater: The World of Shakespeare

Shakespeare for Children: The Next Step

By the way, as the boys grow older, we of course will read Shakespeare’s full length plays.  And as we do, I plan to add this book to our library: 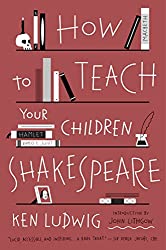 3. How to Teach Your Children Shakespeare

This title jumped out at me from a display in the lobby of Shakespeare’s Globe Theatre in London, where Mr. Native Texan and I had the privilege of celebrating our 10th wedding anniversary a few years ago.  We saw Macbeth–it was fantastic!

Although I didn’t purchase Ludwig’s book that night, I scanned much of its contents while waiting for the production to begin.  It was inspiring!  I look forward to incorporating Mr. Ludwig’s tips into my family’s own adventures with Shakespeare.

All the world’s a stage,
And all the men and women merely players…

How do you do Shakespeare at your house?

Posted in Family, Other Stuff 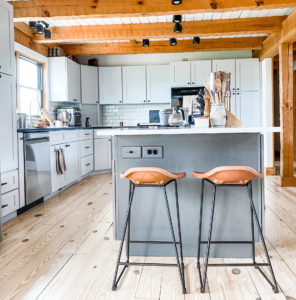 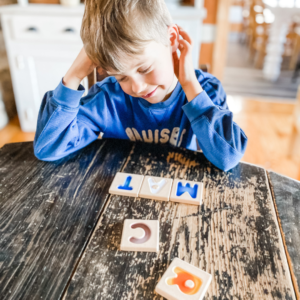 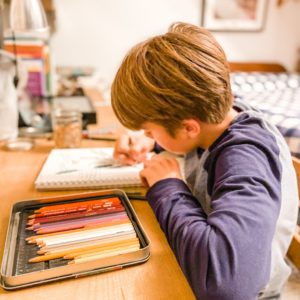 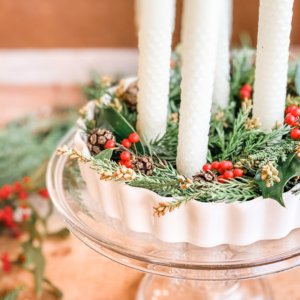